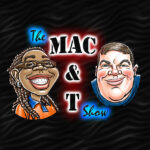 This is our Season 3 Finale episode!

Topics Discussed:
(00:53) NBA Finals
-Cleveland Cavaliers won their first NBA Championship in franchise history; defeating the Golden State Warriors 93-89 in Game 7
-Cleveland wins its first championship in franchise history winning 93-89 in Game 7 against the Golden State Warriors
-Giving Cleveland its first major sports league championship since 1964
-The Cavaliers are the first team to win an NBA Finals Game 7 on the road since 1978
-LeBron James becomes the 3rd player ever to have a triple double (27 points, 11 rebounds, 11 assists) in Game 7 of the Finals
-Does this degrade the 73-9, record-breaking season of the Warriors?
-Will LeBron stay in Cleveland now that he has fulfilled his promise and brought the city a championship or will he choose to leave for a bigger market in free agency?

“Check out” The Mac & T Show on Instagram:
http://bit.ly/MacTgram